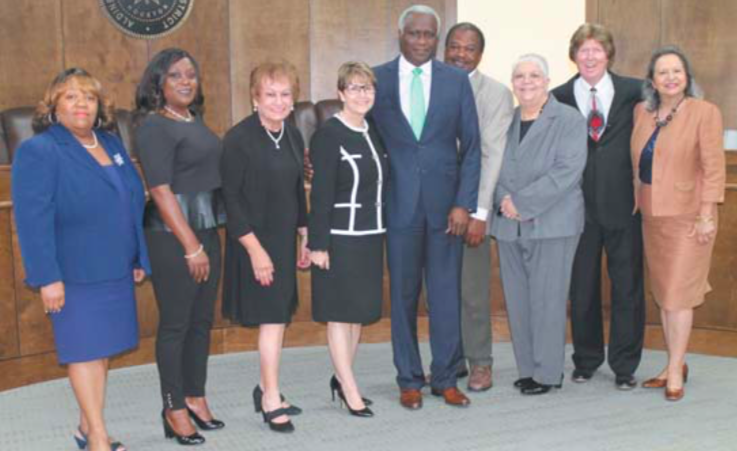 Aldine ISD’s annual State of the District breakfast is looked forward to by the district staff and the public, to hear updates on accomplishments and plans for the future.

But this year was a bit different, as only a week before, two superintendents has announced their retirement plans, leaving the school board with the job of filling the top posts with someone with a new vision and skills.

Bamberg quipped in her opening remarks, that it had taken her 10 years to learn that the students could present the factual report better then she could, so they proceeded to do that.

Among the facts of interest were total enrollment, which has decreased from 69,768 to 67,374, and a budget for the years 2017-2018 of $622 million. They noted that income will not cover the expenditures, and $44 million will come from reserves.

The racial mix of the district is now 73% Hispanic, and the graduation rate has risen to 83%. Two campuses have been removed from the state’s “Improvement Required” scholastic ratings, but three still remain.

A major impact on the district this year was Hurricane Harvey, with flooding impacting staff, students and buildings. Two shelters were established in AISD buildings, serving about 1900 for several weeks with sleeping quarters and food. Bill Ginder, president of the Aldine Education Foundation, said that they had raised over $300,000 to help with relief to affected individuals.

The students also reported on the status of funds from the 2015 $798 million bond referendum. Construction was started on eight new schools, construction of a Northside Transportation Center, and renovations and conversion of nine intermediate schools into elementary. This change will facilitate a “reconfiguaration” plan to go into affect in 2018.

Other noteworthy building plans include the opening of an Early College High School named for Rose Avalos, as part of the new Lone Star College in East Aldine. Also, a new Career and Technical High School, to serve 1500 students, is under construction on West Road, and will be named for Dr. Archie Blanson.

Two new trustees joined the board this year, Connie Esparza to replace the retiring Rick Ogden, and Dr. Kimberly Booker to fill the seat of deceased Merlin Griggs.

Superintendent Bamberg reported that Aldine had become a District of Innovation, providing flexibilities in curriculum and programs similar to state charter schools.

The breakfast included music from the Eisenhower jazz band, presentation of colors by the MacArthur JROTC, and factual presentations from eleven students from all the various high schools.