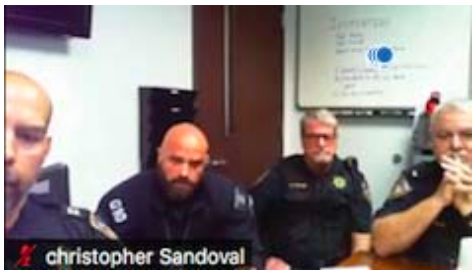 Harris County Sheriff’s deputies, from District II, held a virtual Safety Forum last Tuesday night, June 8 for a presentation to the public of crime prevention measures. There were about 40 participants, some from the community and some from various HCSO departments. The Forum did not, however, take public comments or open the event for public discussion. Instead, contact phone numbers and email addresses were posted for the public.

After a brief introduction by Capt. Chris Sandoval, who is in charge of the Patrol Division of District II, and HCSO Chief Mike Lee, the meeting was turned over to deputies to speak about their particular department activities.

Major Susan Cotter commented on the new technology known as “Shot Spotter” which listens for gunfire and pinpoints the source for deputies to respond. She said that the program was “paying dividends” and very effective, citing a large number of responses that HCSO has investigated.

Deputy Mike Griffin spoke at length about Neighborhood Crime Prevention, the theme for the evening. He coached citizens to be observant, look for suspicious activities such as parked occupied vehicles or slow moving cars, and report them to the sheriff’s office. In other words, the adage “See Something, Say Something” is an effective crime fighting tool. He said it helps to know your neighbors, through group or individual social events, and to get to know their habits.

Griffin said if a situation is Life Threatening or a Crime in Progress, dial 911. If it is a non-emergency, reports or questions should be made to 713-221-6000.

Griffin also spoke about precautions for safety around the house, in particular about firearm safety and control. He said to trim shrubs for good sight lines, and don’t leave items outside that could be tempting to steal. He also talked about the Dog Walker Watch, and Hurricane season and the need to make a “Go Bag” with essentials to take with you if you need to evacuate.

Deputy Teresito Castro spoke about her Human Trafficking Unit, and the difference between smuggling aliens and trafficking them. She outline ways of recruiting and controlling victims. She also mentioned a number of ways you can tell if a person is a victim, by their appearance or habits.

Deputy K. Upton spoke about his experiences with the Gang Unit. He said in East Aldine there are 19 gangs with about 68 gang members, and throughout Harris County about 300 known gangs with 1,619 gang members. The HCSO keeps track of these gangs, and their members, through local and statewide data bases. In Aldine, gangs are known to be operating in Pine Village and Northwood Manor. They often mark their territory with graffiti, and this can lead to territorial fights with other gangs. Members join gangs for reasons such as knowing other gang members, or a known lifestyle, or to gain protection from other gangs. Well known gangs in the Houston area are the Crips and the Bloods, and in Aldine Wolfpack, LTMB, and B*East.

Sgt. Donnie Williams and Deputy Lakisha Cheatham spoke about a new type of policing, called CPOP or Community Problem-Oriented Policing. This Pro-Active unit, formed this year, intends to be more involved with the community and to build personal relationships.