EAST ALDINE – Groundbreaking ceremonies were held last Wednesday, September 8th to mark the start of construction for Subdivision Drainage project E-09 in Castlewood Addition Sections 3 and 4. This is one of over 100 subdivision drainage projects in the county that Harris County Flood Control District is undertaking with bond money from the 2018 Flood Bond issue.

Commissioner Garcia refers to these projects as turning into “smart communities” to mitigate future flooding.

The project will cost about $14.9 million dollars, including an additional $1.2 million to replace water lines not in the original plan.

Construction will start September 15, at Connorvale, and end up 14 months later at Woodgate. 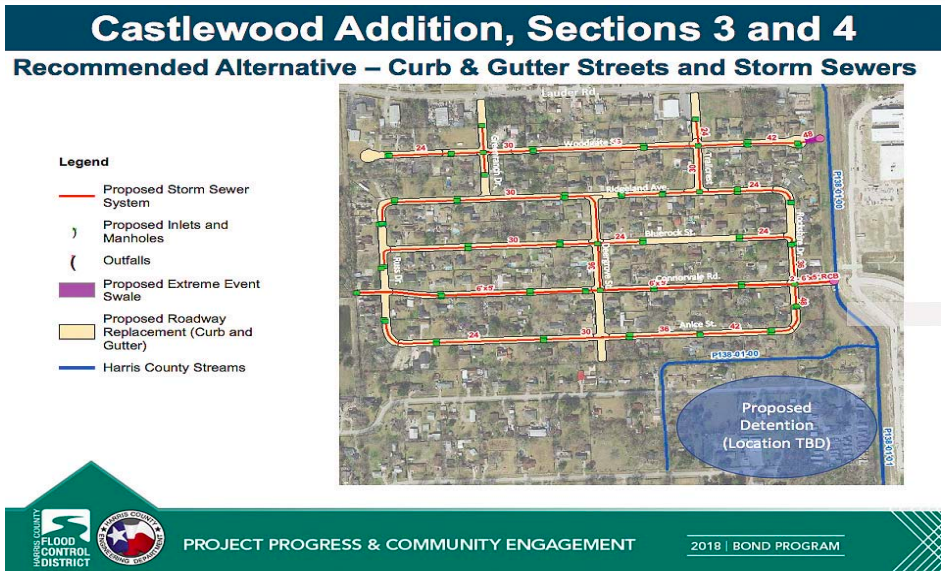 Planned improvements include replacing the existing asphalt pavement and roadside ditches with a full curb and gutter concrete roadway and sidewalks and underground storm sewer. The new roadway will be lower, to allow it to serve as a detention facility in storms.

A detention pond is proposed as well to offset the changes imposed by the improvements. The proposed improvements will reduce flood risk during extreme events, and significantly improve drainage during smaller, more common rain events.

Phase 2 of the project will be similar improvements in the Northern section of Castlewood. This is expected to start in 2022.

On August 25, 2018, Harris County voters approved $2.5 billion in bonds to finance flood damage reduction projects. This additional funding, together with other funding sources, supports a wide variety of recovery and resiliency initiatives.