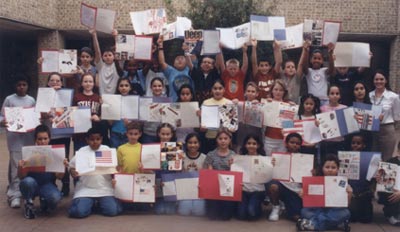 Aldine ISD students and employees have shown their support with their time and money for those who were affected by the terrorist attacks on Sept. 11, and now they are doing so with their words.

Students in Nicole Gismondis fifth-grade gifted and talented reading class at Parker Intermediate recently completed an assignment of making place mats for relief workers at the World Trade Center. The students used their writing and artistic skills to get their messages across to the relief workers, Gismondi said. One half of the place mats contains either a poem or letter the students wrote, while the other half contains a collage or pictures of what Sept.. 11 meant to the students.

The project held significant meaning to Gismondi, a New York native, who visited Ground Zero while she was home for the Christmas holidays. She said the visit had a profound impact on her.

It was shocking, she said, of her visit to the site where the two tallest buildings in New York City used to stand. You dont get a real perspective of what happened there from what you see on TV. Youve got to see it in person to realize the devastation.

After she and a friend visited Ground Zero, they stopped by one of their favorite restaurants, Ninos, which is located 18 blocks from Ground Zero. It was there that Gismondi hatched the idea of having her students do something for the relief workers.

I saw a poster on the wall and it had big yellow rose on it. It was from another school in Texas. I started looking around and noticed that students had sent things in from all over the country. I thought it would be neat to have my students make place mats for the relief workers.

When the spring semester began, Gismondi broached the idea to her students, and they were more than receptive to her idea.

I presented it to the kids and they were thrilled to do it, she said. They asked me about my trip home and they were very interested in what happened. I think the project was good for them because they were able to incorporate much of our curriculum (social studies, visual arts, language arts and reading) and they were able to evoke their emotions of how they felt about Sept. 11.

After the projects were completed, they were laminated and shipped off to Ninos, where they will be used by relief workers who go to the restaurant for a free meal and a break from their emotionally and physically grueling shifts at Ground Zero. Ninos owner, Antonio Nino Vendome, and his mother, Josephine Mama Vendome, decided to turn their thriving 70-seat Italian restaurant into a non-profit feeding center for anyone who works at the disaster site, according to Gismondi. Ninos will remain open to the relief workers until the Ground Zero cleanup is complete, which should be sometime in June.

As a matter of fact, one of Gismondis good friends in New York volunteers once a week at Ninos and has promised her that once the place mats arrive, she will take pictures of them being used by relief workers and then send the pictures back to Gismondi and her students.

On the day the students read their projects aloud in class, Gismondi told her students how proud she was of their efforts.

I asked you to tell me how you felt about Sept. 11 and what you did was far beyond what I had imagined, she said. I am so proud of all of you. Believe me, you have helped and you have contributed in a big way to the people up there.
You did what you could as fifth graders and I couldnt be prouder of you.

I didnt talk about it a lot, but I was able to put how I felt into words, Vince said. I feel like Ive lived through a big thing and Ill have something to tell my kids about.

And he can share with his children the words he wrote to the relief workers.

I am inspired by all the people who helped at Ground Zero after the attacks. I am even inspired by everybody who did small things to help, like give blood or gave a small amount of money to a Rescue/Recovery fund like Red Cross or the Salvation Army. Even though Im not old enough to give blood or fly to N.Y.C. to help out I still gave $5 dollars to the Red Cross and $4.50 to the Salvation Army. I only had $.50 left from my allowance but I felt proud of it! I believe this country will conquer and unite. But until then all this country can do is hope and wait. But you are the people that are going to get us through those hard times. Thank you for all you have done.

Fellow student Erin Donahue shared her thoughts of Sept. 11 with a poem to the relief workers.

Gismondi said she will never forget the care and concern her students exhibited on the project and neither will thousands of relief workers who will benefit from her students actions.