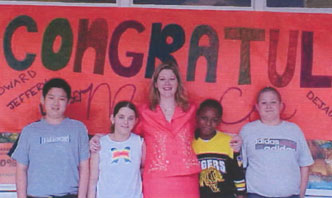 The first contest termed Number Sense, is a 10-minute timed test where the students are not allowed to use a calculator or show any of their calculations on the paper. This contest teaches students to quickly and accurately make mental calculations in their minds.

Eight schools participated in this competition, but one of Ruby Reeds finest students, Lindsey Calfee, won the honor of 1st place for the sixth grade Number Sense competition. Lindsey said ten minutes is not very long, so I was very surprised that I won. When they called first place Lindsey Calfee from Reed Academy I was fixing to faint. Im really proud of myself.

Her coach, Jennifer Forsberg, says she was extremely proud of her as well. She has worked so hard after school, before school, and at all times of the day to ensure her success.

Other participants in Saturdays competition included sixth graders Jeffery Hamilton and Kaelynn Prichard. Jeffery placed 5th in the individual math category. Fifth graders who participated included Dejaune Bickham, Stephanie Hamilton, and Edward Wong. Edward placed 5th and Dejaune placed 6th in the individual math category. Mrs. Forsberg said, They have all worked so hard and deserved every honor that they received, I couldnt be more proud!