A Million Dollar Fishing Tournament? Only in Texas! 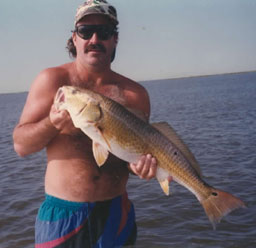 A big redfish like this one pulled out of East Matagorda Bay by Dennis Clooney of Houston could land a huge prize if entered in the Star Fishing Tournament.

We all know that everything is bigger in Texas.
The State of Texas Anglers Rodeo or STAR fishing tournament is out to prove it. The CCA, Texas Ford, Chevron, and D.R. Horton Custom Homes sponsored event is an all summer saltwater event that covers the entire Texas coast. The 13th annual event began at sunrise Saturday, May 25, and continues until sunset on Labor Day, Monday, September 2.

This years participants will have a shot at winning over $900,000 worth of prizes including trucks, boats, motors, and trailers as well as college scholarships. The ever-expanding fishing tournament is open to all anglers of any age. It is considered the ultimate of saltwater fishing for beginners as well as seasoned anglers. Prizes will be awarded to winners in 12 categories.

This year the STAR sponsors have added a new list of fantastic prizes and an added opportunity for young anglers. The Coastal Conservation Association or CCA announced that young anglers will fish free. CCAs New Tide membership, plus STAR entry fees, has normally cost a total of $25. Not any more, thanks to the generous funding from a new partner, Reliant Energy. Younger CCA Texas members, ages 17 and under, have the chance to win generous college scholarships for just the price of a $10 Texas New Tide membership. There will be no extra charge to register to fish in the STAR tournament.

Among this years new bonuses is a scholarship drawing sponsored by the Texas Oilmans Charity tournament. STAR participants under the age of 18 are eligible for an additional drawing that will net one lucky youth a pre-paid, four-year college scholarship through the Texas Tomorrow Fund, even if the participant never wets a line during the entire tournament.

The ever popular Texas Ford Dealers Redfish Division saw four anglers drive off with truck and boat packages last year. For 2002, long time sponsor Texas Ford Dealers will once again give each of the first five registered STAR participants who catch a tagged redfish a brand new truck. The first five registered tagged reds weighed in will net the anglers a 2003 Ford F-I 50 XLT 4 door Super Cab with a 22 foot Blue Wave 220 Super Tunnel boat. Each boat/truck package includes a 150 hp Mercury outboard and a Magnum galvanized trailer. Those catching the next five fish weighed in will receive a Blue Wave 220 Super Tunnel boat, motor, and trailer combo. Young anglers not of legal driving age at the time of the STAR Awards Ceremony who reeled in a tagged redfish will receive the boat package plus a college scholarship via the Texas Tomorrow Scholarship Fund in lieu of the truck.

In the past seven years, more than $1 million has been awarded in college scholarships to young anglers across the state. The STARKids Youth Scholarship Division gives entrants age six to ten a chance to win one of three college scholarships worth $50,000 each for the largest flounder, gaiftop, and sheepshead caught throughout the summer.

American Rodsmiths STARTeens Inshore Division provides a scholarship open to all New Tide members ages 11-17. It awards a pre-paid college scholarship through the Texas Tomorrow Fund for each teen weighing in the largest flounder, gafftop, and sheepshead statewide.

Academy Sports and Outdoor STARTeens Trout Division is also open to all New Tide members ages 11-17. It awards a scholarship through the Texas Tomorrow Fund for each teen catching the largest trout in the upper, middle, and lower coasts. The minimum weight requirement for the trout is six pounds, and all fish weighing less that six pounds should be released back to the water.

New this year for New Tide Members ages 17 and under is a bonus drawing that will net one lucky youth a Texas Tomorrow Fund college scholarship. In its fifth year, the STARCampers Division offers five youths between 10-14 a chance to win an all expenses paid seven-day trip to Sea Worlds Texas Expedition Camp.

Drawing winners will be determined during the evening of the STAR Awards Ceremony on October 3, 2002.
With winners in the upper, middle, and lower coast regions, the popular Trout Division pays big dividends for anglers coast-wide. The Upper Coast winning angler will take home a 22 Triton BayFlight while the Middle and Lower Coast winners will win a Triton 22 Tunnel hull. All boats come with a 150 hp Mercury outboard motor and a McClain trailer.

Offshore fishing usually delivers some of the sports biggest fish. In this case, it also offers some huge prizes.

Anglers who land the heaviest kingfish, dorado, and red snapper will each win an offshore set up that can handle plenty of deep seas. The lucky registered winners will tow away new 24 Sea Fox 237 Center Console with a 150 hp Mercury outboard and McClain trailer.

Wade and shore fishermen alike will be elated with the prize in this division. Anglers with the largest flounder, gaiftop, and sheepshead will each cruise the water in a new bay-ready Scout 172 Sportfish Center Console with a 90 hp Mercury outboard and McClain trailer after winning the title in this division.

In its 13th year, this unique division gives away a prize package even if the participant didnt wet a line during the entire tournament. The name of one lucky person will be drawn during the STAR Awards Ceremony on October 3. That person will be awarded a Triton 22 BayFlight with a 200 hp Mercury outboard and McClain Trailer.

For complete information including a list of weigh-in stations and instant registration locations, call the STAR Information Hotline at 713-626-STAR.

Dont even think about casting a line into coastal waters without registering first. Each year, there are several disappointed anglers who didnt register for the tournament only to snag a prized tagged redfish worth thousands of dollars in prizes.

The excuse, I forgot! doesnt count when the prizes are handed out!