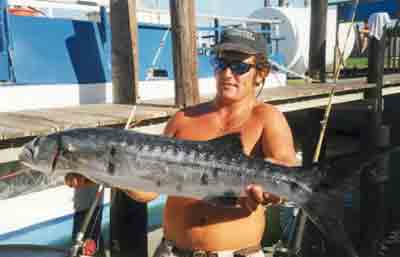 First Mate Nate Forbes admires an exceptionally bug Barracuda caught by the author from a cluster of offshore rigs 60 miles off the coast of Port Aransas.

To the dedicated offshore fisherman, the week of July 4th

is more than fireworks, flags, and parades. It is during that special week that anglers venturing offshore will find the fireworks may come in the form of screeching reels created by a parade of hard-fighting game fish found in the blue waters of the Gulf.

Early each year, avid blue-water anglers watch and listen for the news that the first ling of the season has hit the docks. That important tidbit of information may be ignored by many but for every alert offshore fisherman, it is the first signal. Catching the first ling serves notice that winter is a distant memory and deep water fishing for the ling (cobia), kingfish (king mackerel), dolphin (dorado), tarpon, barracuda, sharks, and numerous other migrating warm-water species is soon to follow.

All of these game fish have their own following, but all provide a level of blue water fishing difficult to top by any other type of fishing. The sheer excitement of catching these near-offshore fish turns sport fishermen on because of the fishs fighting ability when it is caught around rigs, over structures, or in the open waters of the Gulf.
One advantage of these blue water fish is that they generally can be caught within easy reach of the mosquito fleet of smaller boats during good Gulf weather. However, storms and squalls fierce enough to play havoc with a small fishing boat can crop up in the Gulf quickly. Dont take a chance of venturing too far into the Gulf if the weather is the least bit questionable.

Well into the offshore season when the weather gets hotter and the Gulf waters get slicker, the schools of migrating fish get larger and more plentiful. However, the average size of the fish is often smaller. For reasons only known to the fish, the first arrivals early in the offshore season, especially the ling and the kingfish, are often larger than those caught later in the year. The first heavyweights that show up along the coast generally travel alone or in small groups.

The quality of water is the main key to finding and catching feeding kingfish. Kings prefer the clear, blue waters of the open Gulf. South of Port OConner, I have caught kingfish within sight of the sand dunes. Find the clear water, and you will most likely find schools of catchable kingfish.
Although a lot of kings are caught during late May and early June, the avid offshore pros consider the July 4th weekend as the official kick-off to the kingfish season. Thats the time when the weather settles, the seas flatten out, and the temperatures as well as the fishing heats up.

Summertime surface action is in full swing offshore, and with it comes schools of brilliantly colored green, bright yellow, and gold dolphin. Locating them and catch them can be a blue water bounty. Large schools of dolphin can be found lurking under the protective shade of an anchored, ocean-going shrimp boat or feeding along a trash line created by the meshing of Gulf currents.
Unfortunately, many of these smaller school or pompano dolphin are winched aboard with heavy offshore-type tackle. Regardless of size, dolphin always put on a thrilling display of acrobatic leaps and sizzling runs. For the times when a school of dolphin is located, always keep a light rig handy to experience an exciting fight on scaled-down tackle.

Most of the really big dolphin usually roam the deeper waters farther offshore past the 100-fathom curve in billfish country. These are also a different species from their smaller cousins.
Big ling show up along the coast all summer, and the schools are made up of fish of all sizes. The larger ling can be real tackle-busters, weighing 70 or 80 pounds. Their favorite haunts are around offshore structures such as oil rigs, buoys, platforms, and anchored shrimp boats.

During the early offshore season in late June, the migration of tiny blue crabs trying to make it back to the bays dot the surface of the offshore Gulf. Big schools of ling will gorge themselves on these baby crabs during this period. The ling will be feeding right on the surface. This makes for prime time fishing when stalking the elusive ling.

Another offshore brute known for its vicious strikes is the barracuda. In the deeper waters of the Gulf, the long silver and black speedster can grow exceptionally large and is known to sport a mouth full of razor-sharp teeth. They are notorious for attacking a hooked gamefish. On numerous occasions, I have had sizeable snapper or big amberjack either cut cleanly in half or come to the boat looking like they had been through an Enron Company document shredder.

With a large capacity reel full of line and acres of open Gulf, hooking up with a hard fighting barracuda can be as good as it gets in offshore waters.

Catch the next green tide into the blue water world of offshore fishing. During the next few months, the weather as well as the fishing for these monsters of the deep will only get hotter.