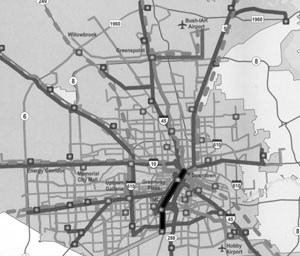 HOUSTON– After weeks of public hearings, METRO is preparing the final recommendations to present to its board on July 31st.

Two themes which have repeated in many of the meetings are the need for light rail to encompass more of the needs of the minority community, and for the funding for road improvements to continue.

In response to the comments, METRO has modified their Phase I map to include light rail lines to Intercontinental airport, and to the Galleria/Greenway Plaza area. This would increase the number of miles from 41 to 55, and provide many more destinations, according to Chairman Arthur Schechter of Metro.

In addition, an option of borrowing money (or selling bonds) would be offered, in two versions. One would accelerate completion of the rail proposal. The other would offer only a reduced rail system, 13.7 miles in addition to the 7.7 now being built, but would have extra monies available to fund the current roadway or general mobility plan. This plan is scheduled to end in 2009, and many communities have complained that they will have to raise local taxes to compensate for this loss of revenue.

The new proposal includes money for 12 additional bus routes, including an East-West Line on Aldine Mail Route to West Road.

However, no action was taken on requests for a light rail extension to Gulfgate Mall and further west on I-10, but some money is left in the budget for more lines.