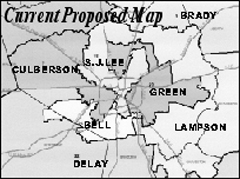 AUSTIN– Legislators have been meeting since Monday, in response to Governor Perrys call for a Special Session to Redistrict the lines for Congressional seats.

Representative King has produced a new map, shown below, that would retain more of the old boundaries in the Houston area than previous attempts, but the end result statewide would still be a loss of seats for the Democrats in the 2004 elections. Estimates have ranged from 5 to 7 seats would go to the Republican candidates, at the expense of incumbent Democrats.

Locally, Congr. Chris Bell and Sheila Jackson Lee may lose their seats because major changes to their districts might erode their voting base. Congr. Gene Green and Nick Lampson would have to move their residences to hold on to their districts.

After the Session had met for a day, Governor Perry placed 28 more issues on the agenda. These included government reorganization, that would broaden the powers of the governors office, which is traditionally one of the weakest in the nation.

Not included was any bill that would deal with the problem of school financing. This will probably come up in another session later in the year.