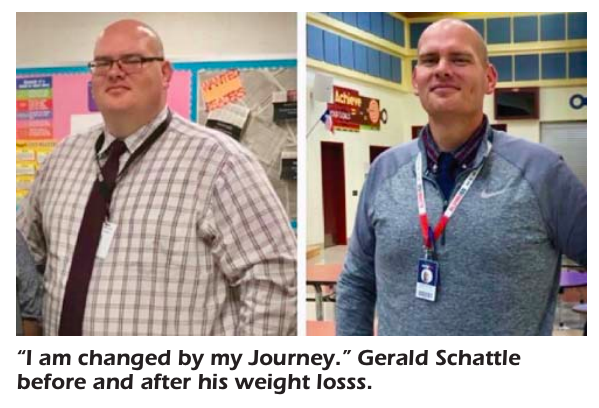 ALDINE – Gerald Schattle, who has lived in Aldine all his life, lost 80 pounds with diet and exercise and then started running. The Aldine Education Center principal not only embarked on a weight loss journey but used it to connect with the community.

He was inspired to run a marathon that connected the kids he serves. He explained, “I don’t look like the kids I serve, so I knew I needed to find a way to build connections. Whenever kids talk with me, I can make connections with the neighborhoods because I ran them.”

Schattle was able to actively inspire his students by explaining that weight loss is not just one event but a process and a lifestyle change. He says, “I am changed by my journey. Not only did I lose weight, but I incorporated prayer and became more active in my church.” It helped him apply what he learned and relate it to his students’ process.

Weighing 397 pounds at his heaviest, his goal was to finish a marathon; he trained by running through the neighborhoods where he and his students live. What inspired him to lose the weight, he said, “I am a father of 2 girls and have been married for 15 years. When I was a first-year principal, I was 35 years old and almost 400 lbs. By doing the math, I knew there were not many 80-year olds that big. I would not live to see my kids grow if I kept going on this path.” He explained that after prayer asking God for help, and journaling, he started tracking his weight and using a weight loss app called “Lose It.”

He went on, “Over the course of one year, I started tracking my food and lost a significant amount of weight and then in summer of July 2018, I wanted to train for a marathon, and I want to run it in the Aldine community.”

Schattle started running at 320 pounds and lost a significant amount of weight, then weighing 290 pounds. After running his first marathon in February USA Fit down in Sugarland, Spring of 2019, he “decided to go plant-based, no meat or dairy and that also helped me lose weight and keep it in check.” When discussing how to stay motivated when beginning a weight loss journey, Schattle explained that it was a “lifestyle change” not just a diet. He said if you’re doing a diet, that means you’re going back to your old habits, and if you do that, you’re going to get the same old results. He went into how much of his change was really a mindset; in his past, he identified himself as a “big person” and made choices that reinforced that identity.

Schattle’s message to the community is, “We all have greatness inside us, and we get discouraged. The kids I serve have been told they weren’t good enough or weren’t smart enough, or weren’t capable. You can always change the narrative by making a choice a conscious choice. That’s the beauty of education, and of choosing to make yourself better, the journey of self-improvement is the best thing you could do for yourself.”