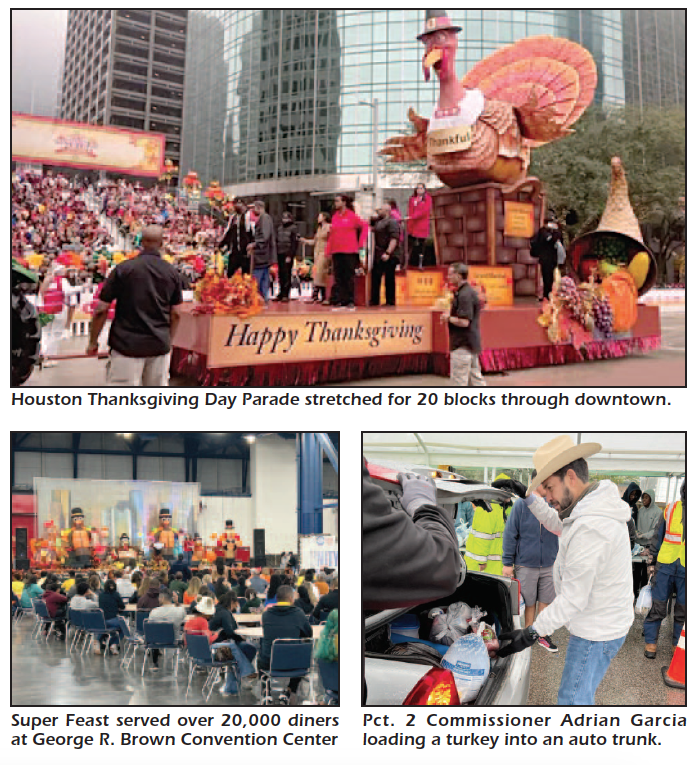 Houston got into the Holiday mood starting on Thanksgiving day, with a Super Feast at the George R. Brown Convention Center, serving almost 20,000 a tasty Thanksgiving dinner, and a festive, colorful Parade in downtown Houston.

The Parade continued in spite of a light rain that came and stopped intermittently. Marching band members and riders on floats and horseback simply donned plastic ponchos and kept going. “Don’t Rain on my Parade” was the theme, it seemed.

The Super Feast is in its 44th year, and served over 35,000 meals, to both in-person sit-down diners, and drive-up patrons. Each received a food package with about 60 to 80 pounds of various types of foods, including a turkey, chicken or ham, enough for a family for about a week. The organizer of the Super Feast is the City Wide Club of Houston. They serve these meals twice a year, on Thanksgiving Day and the day before Christmas, to everyone who comes to the Convention Center.

The Thanksgiving Day Parade is sponsored by HEB, and is in its 73rd year. It traverses over 20 city blocks, and features elaborate floats, colorful marching bands and drill and dance teams, balloon figures, horse and wagon units, and much more. Several hundred thousands spectators line the streets to see the spectacle, as well as thousands more watching TV. The Grand Marshal of the Parade this year is Curtis “50 Cent” Jackson. Participating from Aldine was the Carver HS Dance Company.

In the spirit of the Holiday Season, a number of Turkey giveaways occurred through our communities. Pct. 2 Commissioner Adrian Garcia gave away over 1000 turkeys at a dozen sites, as did Judge Joe Stephens in the North Channel area, and a similar giveaway at Davis High School in Aldine. Many other organizations throughout the county had similar free food distribution during the Thanksgiving week.

After Thanksgiving, many families spent the next day shopping for bargains at Black Friday sales. However, stores were not as busy as previous years, perhaps because there are more shopping days this year, or online sales have taken the pressure off. Many stores were closed on Thanksgiving day, for the first time. Some shoppers took advantage of Toys-R-Us returning as a department inside Macy’s stores.

Communities throughout the county were preparing for Christmas celebrations, with tree lighting ceremonies and appearance of Santa Claus for chats and photos. In Highlands the event will be at the Community Center on Thursday December 8, from 5pm to 7pm, with cookies and hot chocolate and an appearance by the Grinch. In East Aldine a huge tree will be lighted on Friday December 9, from 6pm to 9pm and includes Frosty the snowman, Horse drawn rides, photos, hot cocoa, and Real Snow! In Crosby the 23rd Annual Christmas Festival takes place Saturday December 10 from 1pm to 5pm at Crosby Church, with hayrides, petting zoo, photos with Santa 2pm to 4pm, Holly the Elf, a Christmas Market, free food and at 6pm a Lighted Parade.