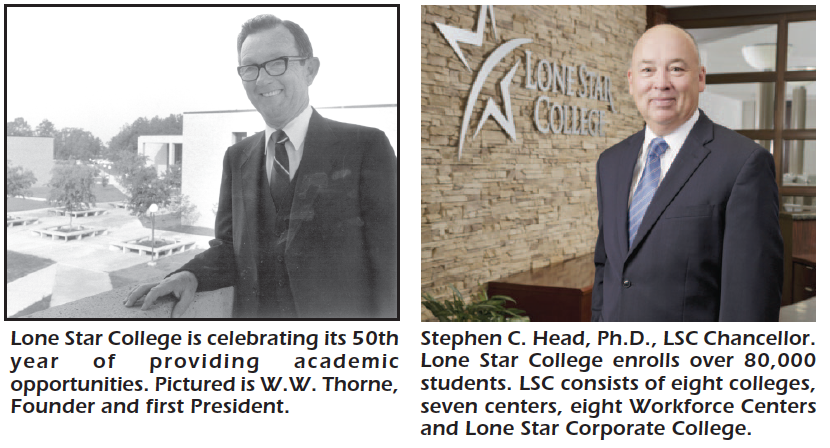 Houston (Oct. 7, 2022) – On Oct. 7, 1972, voters overwhelmingly approved the creation of North Harris County College which went on to become Lone Star College. LSC is now celebrating its 50th year of serving students and community providing high quality, affordable education close to home. Starting with 613 students taking classes at Aldine High School to welcoming more than 80,000 students each semester, the LSC story is one of incredible foresight, determination and a commitment to student success.

“50 years ago, forward thinking citizens came together with the vision of creating a college for their community,” said Stephen C. Head, Ph.D., LSC Chancellor. “People like John A. Winship, W.W. Thorne and Joe Airola laid the ground work for what was to become one of the elite community colleges in the nation.”

Thanks to support of Spring, Humble and Aldine Independent School Districts, architectural plans for the new college were drawn and construction began on what became the flagship campus at LSC-North Harris.

“It was unbelievable to be in on the starting of this magnificent community college; it was just wonderful to be part of the beginning,” said Dr. Joe McMillian, Chairperson of the Division of Mathematics, Science, Engineering and Physical Education when the college opened.

Thanks to the early success of the college, five more independent school districts in New Caney, Tomball, Conroe, Splendora and Willis joined the college district, helping it reach even more students and leading to what would become LSC-Kingwood, LSC-Tomball and LSCMontgomery.

“The college was important to this community because of the quality of education,” said Ray Laughter, LSC Vice Chancellor Emeritus for External Affairs. “People moved from the city into the suburbs for the quality of life and a big piece of that was quality education.”

As Houston welcomed in the 21st century, residents welcomed LSC-Cy- Fair in 2003 and the North Harris County College District, which began in 1972, was renamed and became the Lone Star College System in fall 2008. In 2009, LSC purchased the former world headquarters of Compaq Computer Corporation to create LSC-University Park which opened its doors in 2010.

“When we organized the college, the other junior college presidents in the area said we were really not thinking big enough,” said W.W. Thorne Founder and first President. “Not even they could conceive of what happened to the college.”

As the college grew, several student success initiatives were developed including the building of world-class workforce programs, the creation of The Honors College at Lone Star College, launching LSC-Houston North to address an underserved area of Houston, the addition of bachelor’s degrees for students looking to advance their education and developing LSC-Online as the eighth campus in the system.

In celebration of this historic event, LSC received a proclamation from Texas Gov. Greg Abbott reading in part, “unrelenting in your focus and commitment to providing a rigorous, well-rounded education, you have established a legacy of success that will long highlight the best of our great state.” LSC was also honored by city of Houston Mayor Sylvester Turner declaring Oct. 7, 2022 as Lone Star College Day for “going above and beyond in its efforts to provide affordable and quality education.”

“What started as an idea to bring higher education to an underserved community has now grown into an institution that has become one of the leading community colleges in the nation,” said Head. “Lone Star College is a living testament of what can happen when communities join together and work toward providing a better way of life for all people.”

Lone Star College enrolls over 80,000 students each semester providing high-quality, low-cost academic transfer and career training education. LSC is training tomorrow’s workforce today and redefining the community college experience to support student success. Stephen C. Head, Ph.D., serves as chancellor of LSC, the largest institution of higher education in the Houston area and has been named a 2022 Great Colleges to Work For® institution by the Chronicle of Higher Education, ranked 35th in Texas in the Forbes ‘America’s Best Employers By State’ list and recognized by Fortune Magazine and Great Place To Work® as one of this year’s Best Workplaces in Texas™. LSC consists of eight colleges, seven centers, eight Workforce Centers of Excellence and Lone Star Corporate College. To learn more, visit LoneStar.edu.