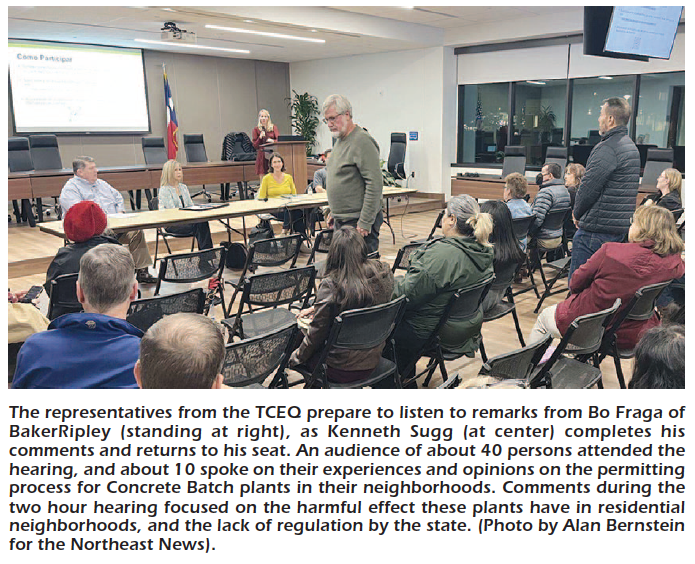 EAST ALDINE – Representatives of the state TCEQ (Texas Commission on Environmental Quality) held a hearing last Monday night, Nov. 14 to hear comments from citizens about the permitting process for concrete batch plants located in the community. TCEQ is holding three meetings, in Austin, Houston, and Arlington prior to modifying the requirements for issuing permits for these concrete plants.

The agency is conduct the hearings as it reconsiders its functions as part of a state-mandated “sunset review” and because of feedback from the public about batch plant permitting, they said.

East Aldine residents and officials have expressed expressed concerns that the approved plants will emit pollution and dust and cause other ill effects.

Although the TCEQ staff said that comments made at the meeting would not be officially recorded, they listened for almost two hours to considerations and complaints from the audience members present.

New Information about air monitoring in Aldine came from Roberto Gasparini of Spirit Environmental Consulting, who said that TCEQ had an air monitor near MacArthur High School, and it had been there for 20 years. Its results are available on the TCEQ website. He said his monitoring work sometimes leads to the shutdown of concrete plants.

Kenneth Sugg spoke about his experience driving concrete trucks, revealing the problems they create. He also questioned why the state allows cement dust to permeate over neighboring residential properties.

Sugg also said that the TCEQ never really said what their proposed revisions to the permitting process would be, but did say they could not by law consider traffic problems and noise in their review.

Shirley Ronquillo asked why the TCEQ doesn’t distribute information about potential permits in a more transparent methods, and bilingual.

Selina Valdez spoke about the schools and college in the area, and the fact that students could not safely function outdoors due to air pollution. She raised the need for more air monitors in the Aldine area. “For our kindergartners, and our seniors in high school, and our folks taking college courses across the way, how are we going to know to tell them today’s a good day to breathe the air?” she asked the panel.

Leticia Gutierrez of Air Alliance Houston pointed out to the panel that these pollution problems most often occur in neighborhoods of black and brown minority residents, not close to better areas.

Bo Fraga and Rocio Witte of BakerRipley spoke in favor of stronger regulations needed to protect users of their campus and neighborhoods.

Marina Sugg asked how many permits were issued statewide last month, and how many were denied. The TCEQ representatives said they did not know, and apparently didn’t keep track of that information.

In East Aldine there are eight noisy, dusty, concrete plants polluting the air in just five square miles near schools, neighborhoods, and parks. A ninth concrete plant got approval over the summer, and there wasn’t much anyone could do to stop it. In light of that, people took this opportunity to make sure the commission considers their health, homes, and the environment in the decision-making process.

The agency is considering a requirement that the state conduct an “updated Air Quality Analysis” before granting new permits for concrete plants.

The analysis would be “a report containing information that demonstrates that emissions at a concrete batch plant authorized by (a) permit would not cause or contribute to a violation of the National Ambient Air Quality Standards, exceed a state property line standard, or adversely affect human health and the environment.”

TCEQ this year approved a permit for Avant-Garde Construction Co., a LaPorte-based business, to operate a concrete batch plant at 10945 Eastex Fwy., next to Harris County’s James Driver Park and several residential streets. The county recently spent $7 million on improvements to the park.

The TCEQ is reviewing how protected people are who live near these plants. A proposed amendment is expected early next year followed by a period for public comment. The earliest new standards on the air we breathe could be implemented is mid 2023.

Contributing to this article were Marina Sugg and Anne Marie Kilday.