Lance Dean of East Aldine District described an expansion of the BIG (Business Improvement Grant) program that now includes demolition of substandard structures, to improve the appearance of the district and enhance the value of properties. Dean said the 50-50 matching grant program is meant to encourage eligible property owners, businesses or individuals, to demolish structures for future development or quality of life improvement.

END_OF_DOCUMENT_TOKEN_TO_BE_REPLACED

The Green Forest Civic Club hosted its first “Safety Pop-Up” event in the East Oakwilde Subdivision on Saturday, August 6, 2022. The event was the idea of the Civic Club’s Special Events Committee chairperson and Board Director, Shirely Ronquillo.

The purpose behind these “Pop-Up” events is to “bring our resources to our residents’ doorsteps and create a safer community for all of our residents,” said Civic Club President, Ruben A. Salazar.

This was the first of many “Pop-Up” events the civic club has in its plans. Shirely Ronquillo says that she wants to bring these events into each of the various subdivisions in East Aldine. “This is an opportunity to not only encourage residents to become more proactive when it comes to crime prevention, but also to try and improve resident involvement in the community overall,” Salazar said.

He also says that the civic club is already planning for its next “Pop-Up” event for sometime in October of this year.

END_OF_DOCUMENT_TOKEN_TO_BE_REPLACED

Houston – Harris County Public Health (HCPH) is pleased to announce that there is a new option for people to get their COVID19 vaccine. On July 13, 2022, the U.S. Food and Drug Administration (FDA) authorized the Novavax COVID-19 Vaccine for emergency use. Following approvals of the Centers for Disease Control and Prevention (CDC) and Texas Department of State Health Services (DSHS), HCPH is now offering the COVID-19 Novavax vaccine to residents. Novavax is a two-dose primary series for individuals 18 years of age and older given 3 weeks apart.

Novavax uses a different technique than other COVID-19 vaccines such as those from Pfizer and Moderna. Instead of using mRNA, which provides the instructions for your body to create the COVID-19 spike protein that in turn induces your body’s immune response, Novavax’s vaccine injects the small protein itself, that your body detects and that triggers your body’s immune response. The Novavax vaccine is based on a well-established method of vaccine development that has been used for years for other vaccines such as the Human-papillomavirus, Hepatitis B, flu, and Shingles vaccines.

END_OF_DOCUMENT_TOKEN_TO_BE_REPLACED

HOUSTON — A family whose SUV was crushed when a concrete-mixer truck toppled off the East Beltway and landed on their vehicle is now seeking compensation in the wake of an apparent freak accident that killed a 22- month-old boy. Nicolas Resendiz was identified as the 22-month-old child who died in the Aug. 5, 2022, crash on the East Beltway

His aunt, Esmerelda Resendiz, described little Nicolas Resendiz saying, “He was just a happy little boy. He wasn’t shy like his sister. He would go to anybody. He would smile with you and laugh.”

The family is having a hard time accepting what happened was real.

“It’s still hard for us to process everything. Doing every day, daily things, with him not being here, or seeing one and not the other,” Esmerelda Resendiz said.

The lawsuit was filed by Jennifer and Maria Resendiz, two of the SUV’s occupants, against National Ready Mix LLC of Kingwood, which is the company that owns the truck involved in the Aug. 5 crash.

END_OF_DOCUMENT_TOKEN_TO_BE_REPLACED

HOUSTON – Harris County leaders took the first step to put a $1.2 billion bond referendum on the November 8 ballot. The proposal would devote $100 million to public safety facilities and technology, $900 million to roads, drainage, and transportation projects, and $200 million to parks.

“The guidelines should include a ‘worst-first’ approach to match funds to the greatest need, with at least $220 million to be spent in each precinct and $100 million to be set aside for public safety,” Hidalgo said.

The “worst-first” requirement addresses a concern that Commissioner Ellis raised, citing past bond initiatives where poorer neighborhoods like those in his Precinct 1 were shortchanged.

END_OF_DOCUMENT_TOKEN_TO_BE_REPLACED

HOUSTON- Due to an overwhelming response from the public, the One Safe Houston Gun Buyback collected 845 firearms and distributed nearly $100,000 in gift cards on Saturday, July 30. As a result of the unprecedented response, the event, which began at 8 a.m. and was scheduled to end at noon, did not conclude until almost 7 p.m., when the last person collected a handful of gift cards.Earlier in the day, dozens of vehicles were turned away due to demand and long lines. However, more than 150 people were given priority vouchers for a place in line at the next gun buyback. Mayor Sylvester Turner and the Houston Police Department will announce a date soon for a second event.

“We used best practices to plan and hold today’s event. I did not know what to expect, and the turnout was overwhelming,” said Houston Mayor Sylvester Turner. “The turnout demonstrates there are too many guns on our streets, and people want to get them out of their possession. The gun buyback is not the only solution, but we can and will make our streets safer and help reduce gun violence.”

END_OF_DOCUMENT_TOKEN_TO_BE_REPLACED

Swap or Appeal is possible

RUSSIA – Houston Native and Aldine Nimitz graduate Brittney Griner, was found guilty of drug possession and sentenced to 9 years in prison last week, as her trial ended. Although her attorneys had sought a minimum sentence, under Russian law this was one year short of the maximum 10 years possible.

However, Russia subsequently indicated by comments from Foreign Minister Sergey Lavrov that a prisoner swap that involved several other American and Russian prisoners might be possible. He warned the United States government that any discussions of this matter must remain private, as they develop.

END_OF_DOCUMENT_TOKEN_TO_BE_REPLACED

HARRIS COUNTY – June 14, 2022, In a 3 to 2 vote, commissioners court approved a new program investing $48 million American Rescue Plan (ARPA) funds for childcare and early childhood development in Harris County. It is the largest known investment of ARPA dollars by any county or city in the nation for early childhood education.

“Early childhood programs have one of the strongest returns on investment of any type of public program. Those positive effects also endure throughout the child’s life, increasing their graduation rates and future earnings while reducing any possible contact with the criminal justice system,” said Judge Hidalgo. “ We have an obligation to go beyond just the minimum standard of funding roads and bridges and public safety. We also have an obligation to support our next generation of workers and innovators and leaders.”

The program will increase accessibility to high quality childcare and early childhood development by 10% in the third-largest county in the nation. Approximately 105,000 children aged 0-3 with working parents live in a quality child care desert in which there are few or no affordable options for quality child care in their area. Due to the high cost of childcare, often one parent is forced to stay home, preventing them from entering the workforce and costing families lost wages.

END_OF_DOCUMENT_TOKEN_TO_BE_REPLACED 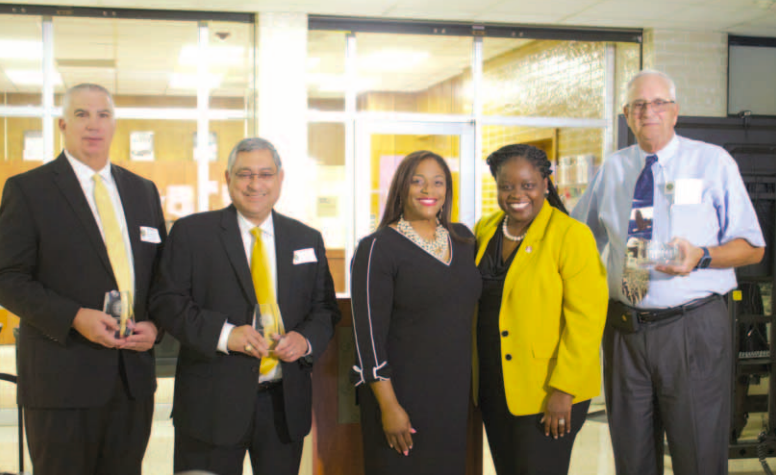 END_OF_DOCUMENT_TOKEN_TO_BE_REPLACED

Plan to demolish Thorne Stadium; play in Spring for 2 years

ALDINE – Plans are underway for Aldine ISD to replace Thorne Stadium and build a new state-of-the-art facility that will open in August 2024. Thorne Stadium opened in 1979.

“We know this news could be surprising to some of our students and families who have called Thorne home, but our new facility will be a place we will all be proud of in just a couple of years,” said Dre Thompson Aldine ISD’s Executive Director of Athletics. “I thank our neighbors for working with us to make this possible. Playing our home games in Spring will be a small challenge for all of us, but we will embrace providing our student-athletes, performing arts students, and this community the experience they deserve. It doesn’t matter where we play. It matters how we play!”